The race director is Chris Barnwell, a Texas native who remembers camping and hiking as a Boy Scout on many of the trails he now runs. Chris spent most of his 20’s and early 30’s overweight and out of shape. Long hours at the office, a busy family life, smoking, and poor eating habits led to high blood pressure and an unhealthy weight. His transformation started slowly, first with small changes to his diet, followed by a new habit of walking every other day. Walking turned to running and in December 2009, Chris ran his first marathon. In total, Chris lost 80 pounds from his heaviest weight to his lowest weight. He has kept this weight off since 2009.

Since running his first marathon, Chris has run more than 30 races of marathon distance or longer. The accomplishment he is most proud of is completing the Grand Slam of Ultrarunning in 2013 as his first four 100-mile races.

In 2015, as a member of the North Texas Trail Runners, Chris volunteered to become the race director of the Grasslands Trail Run. The race was started in 1999 by Suzi Cope, the first woman to complete the Grand Slam of Ultrarunning and a runner who has been a personal inspiration. Chris took on the race to ensure that Suzi’s legacy lived on. In 2016, Chris became the owner and race director of both the Grasslands Trail Run and the Rockledge Rumble.

Chris met his wife Anne when he joined the Lake Grapevine Runners and Walkers Club (LGRAW) in 2010. They married two years later and enjoy traveling to races around the country. When Chris is not running or directing races, he works for a national nonprofit organization focused on wildlife and conservation. The couple live with their four kids in the Fort Worth area. 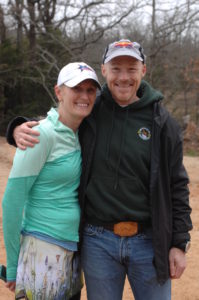